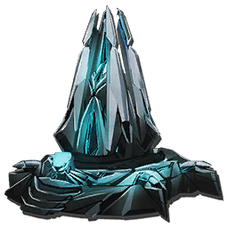 The Tek Transmitter is an end-game tool in ARK: Survival Evolved. It allows for the transmission of items, tames and your character between other servers in a cluster.

The Tekgram is unlocked by defeating either

Crystal Wyvern Queen (Beta) or Dinopithecus King (Beta). Defeating the higher difficulty versions will also give the player the engram. The Transmitter can no longer be acquired on The Center.

Just like with regular Obelisks, you can upload items, characters and creatures and download them on other ARKs. It can no longer be used to do bosses. When activated it shoots a beam of light into the sky similar to a beacon.

It also allows the transfer of water dinos to other ARKS, which could only be done through Deep Sea Loot Crates or an underwater Supply Crates before cryopods.

The Tek Transmitter is not currently paint-able, however this object may be re-mapped to include paint regions in a future update.