This article is about Tek Turret, not to be confused with 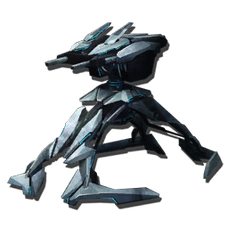 The Tek Turret is a fully automatic turret which can automatically target and fire on enemy dinos, players, both, or all (which includes wild dinos) within its range, but does not target explosives such as

Tek Grenades. The fact that the turret does not need any guidance makes it an invaluable resource to defend against raiding, whilst your tribe is offline.

Element Shard as ammo. The Tek Turret requires electricity from a

Tek Generator to run. It is an upgraded version of the

The Tek Turret has multiple range settings, which correspond to the following distances:

There are six targeting settings. (All of these settings ignore survivors and tamed creatures belonging to your tribe and alliances.)

The Tek Engram is unlocked by killing the Broodmother on alpha difficulty.

As of 242.0, the Tek Turret can no longer be built on Quetzal, Brontosaurus, Mosasaurus, Plesiosaur, or Paracer platform saddles. Any existing turrets on such platforms will no longer fire. This is a server option of "OverrideStructurePlatformPrevention=true". Otherwise they're now only allowed on Rafts and non-moving Bases.

There is also a limit of 100 turrets that can be placed within a 10000 UE-unit (~33.3 foundations) radius. This applies to the combined total of all

Plant Species X. This number can be raised in server settings. This check is done on a turret by turret basis, so different numbers will show up depending on how far away turrets are from each other.If a limit is exceded,turrets will still shot but wont be able to be replaced if removed or destroyed.Start your turret defense from the middle,then go on each side and expand. The turrets in the middle will be at 160/100 and the outer ones around 100/100-110/100.

Region 4 is not used
for this Object.