Tek Windowframe is referred to as "TEK Windowframe" in ARK: Survival Evolved Mobile 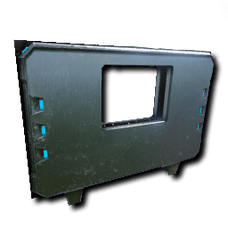 The Tek Windowframe is the final available windowframe. A windowframe functions as a wall, providing structure to a building and enclosing an area, but with the addition of a small hole to allow inhabitants to see outside.

A Tek Windowframe can be placed on any

Ceiling (with the exception of the

Thatch Roof), or another wall.
A

Window can be placed in the hole and opened to provide a view of the outside world, or closed to provide protection from projectiles.
A windowframe also provides support to allow a structure built on top of it to extend up to 2 ceilings in any direction on the x and y-axis, and up to 1 ceiling diagonally from a windowframe which is directly above a foundation.