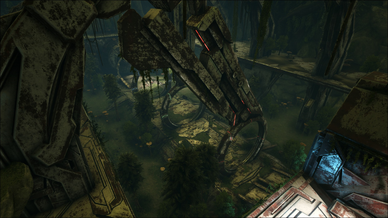 The Ancient Device, or Portals is one of the spawn points in the Aberration DLC. It is a straight forward path that leads deeper into the depths of Aberration. Although it is considered the "easiest" spawn point in Aberration, the lack of water (berries and mushrooms being the only steady supply) can present a challenge. Also the greater amount of Raptors make this area quite dangerous for survivors to actually start their journey here until the Bolas are unlocked, making the raptors easy to tame.

In addition, Tames that have survived

Rockwell's boss-fight will arrive here instead of the summoning terminal unlike other maps.