The Caverns of Lost Faith

Edit
The Caverns of Lost Faith 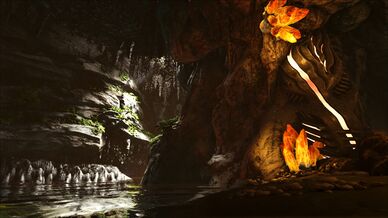 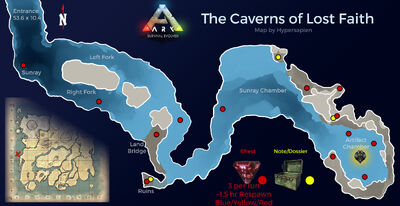 The Caverns of Lost Faith (more commonly referred to as Brute Cave) is an underwater Cave on the west coast of The Island map. The cave contains the

Artifact of the Brute, needed to summon the

Note: It has been observed that the cave initially spawns with far more enemies than normal, making the first clear VASTLY more difficult than subsequent attempts. This is unlikely to be a problem on Official and long-running servers. Still, single-player and newer servers should consider taking much greater precautions or even using Admin commands to pre-clear and normalize the cave. More testing is required to determine the exact conditions that can cause this intense overpopulation.

The cave is fairly easy to get turned around in, with a roundabout-like cavern halfway between the entrance and the artifact that leads in three directions (one the entrance, one the artifact, and one a large chamber with pearls). This cave is by far the easiest of the two underwater caves on The Island. Compared to The Caverns of Lost Hope, whose primary incentive is loot crates and not much else, The Caverns of Lost Faith features perhaps the densest collection of

Silica Pearls with fewer hostile creatures. One danger is the frequency of high-level

Sabertooth Salmon, who can be unintentionally dragged into a fight against the

Megalodon and other predators that populate the cave.

The cave entrance starts with a bend on the right, leading you to a room with a ceiling light and kelp, several pearls scattered on the floor. The passage forks, the left side leads to the main water pathway. Worry not; you will have access to air on the surface. The right path leads to a decently wide dry area from which you can shoot most of the creatures down safely. Both paths merge back into a water channel, a small path on the right leads to an Explorer Note (Rockwell Record #9), while continuing along the water channel will eventually force you to submerge once again for a short moment (can be swum across with 100 oxygen and no flippers or buffs if you submerge as close as possible).

The next area is a large and deep room with several Mantas, Megalodons, jellyfish, and more. If you hug the left wall until you reached the wall in front of you when you came in, you will find a very small shallow rock which you can stand on to recover stamina (the area is dark, and it may be difficult to find). At the end of this room is a dry ledge from which you can safely shoot into the water, as well as an Explorer Note (Nerva Note #9) and a tunnel leading to the artifact chamber. Underwater is another submerged passage that leads into the artifact chamber as well.

Coming from the dry path, you will stumble across yet another Explorer Note (Tusoteuthis Dossier) and find yourself on a U-shaped ledge. There are bushes in this area that may be gathered for emergency food (potentially needed due to the cold temperatures). Inside the basin of this room is the artifact.

The artifact chamber can be accessed on foot (see gallery) or by the main water cavern (just below the foot entrance). While this cave features walkable areas, there do not appear to be any subterranean creatures.

Nothing in this cave is tameable with the exception of Coelacanth, Trilobite, and Sabertooth Salmon, and many creatures do, in fact, spawn above standard levels (as with the Swamp and Snow Caves).

Beware of creatures phasing through the walls as you traverse the cave. This is especially dangerous if a Cnidaria attacks your mount and leaves you vulnerable to a swarm of mantas. Always keep your eyes peeled and stay in motion to prevent the likelihood of an ambush.

Take notice, if you're playing in solo mode, that the enemies in some areas will spawn in bulks, meaning you will not make it through unless you have bred and mate-boosted dinos. Never go there with only 2 dinos, like a couple of Baryonyx. Bring a nice pack with good stats. DO NOT underestimate this cave, despite being described as "fairly easy".

By far, the easiest method is to simply speed through with an Ichthyosaurus or Manta and avoid combat, luring enemies away from your desired loot and quickly going for the grab.

A high level tamed Basilosaurus can work as well, though one must pick and choose their fights and be careful not to attract more enemies than they can chew through. Make sure not to accidentally attack an Ammonite, or you may be swarmed by too many creatures to even escape.

Another viable method is the "Kraken Meat Grinder". A high-level imprinted Tusoteuthis specialized for combat (super breeding is not necessary) with a decent saddle can slowly cleave its way through the cave. Make sure not to venture in too far too fast, and use its massive attack area to fill the screen with kill confirmations. Once the bulk of the minor hostiles are dead, you can use the Tuso's alternate grab attack to leech and recover health from the remaining larger predators, including Alphas. Consider scouting with a more disposable creature to learn exactly where the bulk of the enemy spawns begin; a Tuso's biggest weakness is having trouble orienting itself to defend when attacked from multiple sides. Advancing recklessly and getting completely surrounded by mate/alpha boosted hostiles, including the weakening effect of Electrophorus, can doom even the toughest mount. Consider bringing an additional Tuso or more to cover one another if you're unsure how to approach it.

All loot crate positions can be found at the Explorer Map (The Island). All possible loot items are listed at Loot Tables/The Island/Caves.

The majority of the cave is accessible to most tames. All the water creatures will fit in the water parts. However, you may want an amphibious mount for the later sections (which include land-only areas), e.g., a

Tusoteuthis can swim the entire span of the cavern along the path to the Artifact Chamber, allowing you to reach the artifact with ease. The round-about toward the pearl chamber is quite shallow; however, perhaps too shallow for anything much bigger than

Ichthyosaurus, but the rest of the cave is definitely large enough for a