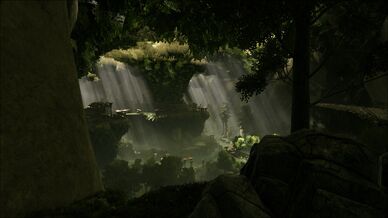 The Emerald Forest is a cave in the Valguero DLC.

A large underground forest that resembles Aberration, and was the first area to introduce Aberrant creatures and tames outside of the map.

Like Aberration, creatures spawned here, which have the "Aberrant" prefix, are immune to radiation, and can then be utilized to explore The Unknown.

- The Emerald forest is the easiest way to get

Bio Toxin, you can harvest red mushrooms there for tons of

Roll Rat is recommended for gathering

Iguanodon is recommended for

- The Emerald Forest is the best place to tame an

Anglerfish instead of going deep down in the Ocean, they can't move freely and flee in the Emerald Forest Lakes.

Ravagers are rare, but if some spawned you'll find 2-4 ravagers.