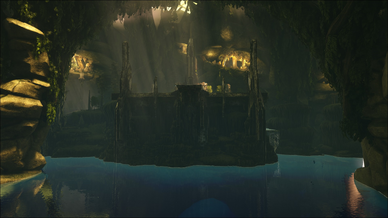 The Fallen Nexus is a relatively safe, partially forested area. This area is dominated by the Fertile Lake, a large body of water of moderate depth. While the lake itself is quite hostile, containing both

Spinos, the land around is far more hospitable.

Carnos are the largest common predator once you leave the beach, though packs of

Ravagers may cause some grief, and

Basilisk can be found buried on the shores. In terms of resources, it is important to note that the largest trees in this area cannot be harvested for

Wood (though they can have

Tree Sap Taps applied to them), and, despite the overwhelming presence of destroyed

Metal Structures in the area, actual

Metal Deposits are essentially nonexistent. However,

Fungal Wood can be found quite easily, and the small creek running from the south-eastern shore contains

Organic Polymer can be gathered from the

Karkinos in the lake.

In lore, with so many buildings in one location, this location is possibly the base of operations where the futuristic survivors, Diana, Santiago, Mei Yin, Helena, and Rockwell lived until the Rockwell Incident and when the Gateway Project was finished.