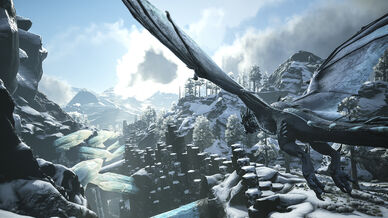 The Great Trench is a region in the Valguero DLC.

The Great Trench has a look similar to the Wyvern Trench on Ragnarok, and it similarly has an entrance to a cave system, attaching at the bottom of both ends of the trench. Only

Ice Wyvern and their eggs spawn in the surface trench, which is frozen and covered with snow and ice. Inside the cave, however, it is substantially hotter (90-125 °F/32-52 °C), with lava flowing throughout.

Fire Wyvern and their eggs spawn in this area, and on a small island at the bottom of the largest room is the Artifact of the Skylord. The eastern entrance to the cave is heavily populated with various insect and volcanic species (Araneo, Arthropluera, Dung Beetle, Mantis, Titanoboa) making it a good source for Chitin and Organic Polymer. Sulfur deposits spawn throughout both the surface trench (along the bottom and in the tunnels from the land bridges) and the cave system. Make sure to level fortitude and bring Fur Armor for outside and Ghillie Armor or Desert Cloth for inside the cave, as the temperatures are extreme in both locations.