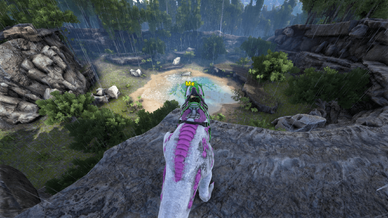 The Hidden Lake (sometimes called Hidden Valley, or Crater Lake, or The Oasis) is a location in the northeast of the Island that consists of a clearing with a small lake, surrounded by very dense forest and boulders. It is a relatively safe location in the otherwise dangerous north part of the Island, although

Castoroides can prove hazardous. There are three paths to enter on foot on which you can fit barely a Triceratops without removing some boulders or trees. With the trees and stones removed, even Brontosaurus can enter and exit the valley. One entrance leads south, while the others lead north and northeast.

This area is a great location for a mid-level base as there are very few carnivores and many resources. Giant Beaver Dams provide easy access to wood and the lake's proximity to Far's Peak provides a good source of metal and crystal. It's brilliant for beginners because other tribes can’t get in if it’s secured properly.

The Hidden Lake is located in the region Smugglers Pass. There are lots of trees and rocks for resources and is hidden by the thick surrounding forest. To the north is a small peninsula with scattered trees, and across the ocean to the east is The Dead Island. This is a well hidden and very small lake, its waters are usually safe and almost always have beavers, but beware of raptors and dilophosaurus around the outskirts.

If the lake is not disturbed by buildings, the following will be present.

If the lake is not disturbed by buildings, the following will be present.

Some rocks containing metal, plants and trees which you can get rare flowers, berries, fiber, wood and thatch.