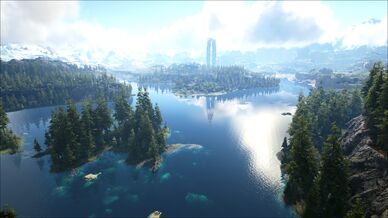 The Lake is a region in the Valguero DLC.

A large body of water in the center of the map, The Lake is the main body of water, and many of the spawn points border it. Its shores are relatively safe for new players to spawn on, but dangerous creatures will sometimes wander down from the mountains.

The southwestern shores are the traditional spawning place for new players, and though it's a relatively safe haven, small, first tames cannot be found here, forcing Valgueno rookies to venture into the Megalodon-infested lake for meats, and travel into dangerous territory to find hide and easy tames such as dodos.

It is among the largest bodies of water free of Leedsichthys, (behind the Ragnarok map), meaning it is safe to build and use rafts. Although they can be found in the Abyss below, the chances of one coming to the surface are very slim, and even if they do they’d likely get stuck on one of the many shallow areas and quickly be spotted.