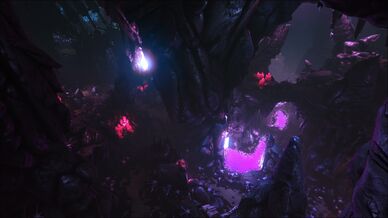 The Lost Roads is located in the western element region, The area is accessible through the west side of the overlook (near the big metal structure).

The area is characterized by an elemental river that has several rocks over it. The region is also radioactive and requires a hazard suit or lamprey. It also has several red spore fields near the entrance, The area is populated with Dangerous wildlife. So come prepared with a charge light to ward off nameless. but don't use it too much.

This area is bordered by Overlook from the north, Halls of the reaper queen to the south and Hopes end to the east.

Even though this area has no reaper queens, Some tend to spawn near the south border, So be careful.