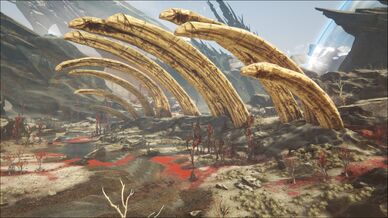 The Ribcage is a region in the Extinction DLC.

It's the giant skeleton of a ribcage seating in the center of the Ivory Gulch valley, on the northern east of the Wasteland.

It's a good landmark for direction or meeting point as the

You can build on the ribs and as you have some Water underneath, you can settle an unusual base on top, far from most of the