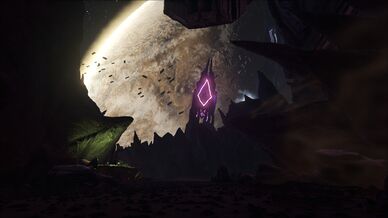 The surface area here, just like the other surface areas, is rich in Oil, Metal, and Obsidian. A large cliffside prevents ease of access but you can utilize a series of ziplines to climb up with a Ravager or Gigantopithecus, or preferably, simply use a Rock Drake. This is among one of the easiest locations to find oil outside of harvesting it from

NEVER explore the surface until night, in the day the Surface is covered with fire. Trying to avoid the fire by any means such as a Rock Drake will never work because even if you avoid the flames the sunlight debuff will kill you in no time making you, your items, and your creatures lost. Depending when you die and how long your death timer is, retrieving your stuff can be possible. When exploring the Surface at night check the time often to avoid loosing any substantial items or creatures. If you run out of time to escape an obelisk or supply drop is a chance to save your creatures and items if you have enough time to upload them. Fire starts to appear at 5:53, and start disappearing at 17:27, often check how much time you have left to avoid any problems.

Only one supply beacon is active at a time here which alongside its sizable area, makes this location the least contested for collecting drops from supply beacons compared to the other two Surface sections.