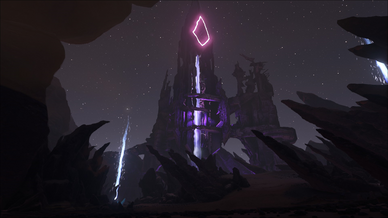 Its entrance is located within the easier portion of the map in the northwest, marked by a fertile spore field. After making it past and to the end of the passage, it is a vertical climb to a ledge that open to The Surface.

Across the daylight's flaming ground, there is a corrupted purple Obelisk among spiky and irregular rock forms. During daylight the ground is on fire. The player will receive a heat debuff as well as an exposure debuff that will bring a swift end to both players and creatures alike. Explore this location only at night.

Seeker's rare drop. This particular surface location has two supply beacons cycling at a time. The small, resource-laden area alongside its plentiful drops makes it one of the more contested locations for resources and supply beacons.