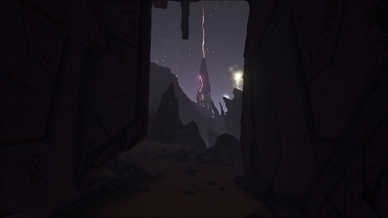 On this area of the surface there is a purple-tinted red Obelisk among spiky and irregular rock forms. During daylight the ground is on fire. The player and tames will receive a heat debuff as well as an exposure debuff, and will die within seconds. This is among one of the easiest locations to find oil outside of harvesting it from

Seeker's rare drop. This particular surface region's resources are found further away from the entrance than usual. On the other hand it spawns up to 3 supply beacons at once which makes it the best place to acquire fantastic loot, especially if you have a Rock Drake to ride on.