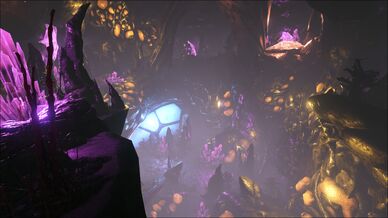 The Unknown is a region in the Valguero DLC.

The Unknown is an Aberration-themed region located in the underground of Valguero. Upon arriving to The Unknown, a player with a mount will receive the effects of radiation sickness. The player is advised to wear a full radiation suit and is highly advised to tame a creature immune to the effects of this area. There is a vast section of the underground that is not irradiated however once you enter the irradiated area you will begin to suffer the effects. Creatures in the underground area are sparse at best however you should still be able to find most of them in a timely manner. There are some odd tek like structures deeper in. Also known as the aberration trench.

It is advised to take powerful mounts, that are immune to radiation (e.g. Karkinos) and be in full radiation suit, do not use light from lightpets (e.g. Bulbdog) because of Seeker's buff, and prepare to fight with some aggressive creatures.