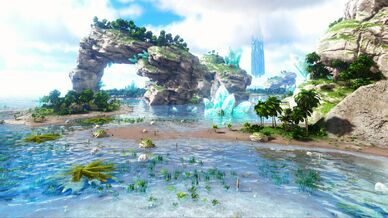 The White Shoals is a region in the Crystal Isles DLC.

The White Shoals is a great place to set up base, as it isn't very dangerous, and the worst possible threat are dilophosaurus and the occasional Spinosaurus. There are several good base locations here, with abundant water sources and lots of metal nodes on the higher areas. It is a bit hot and sometimes gets foggy. Which makes it very hard to find your way, along with lots of rain. But besides that this is an amazing area to begin.