This article is about Tripwire Narcotic Trap, not to be confused with 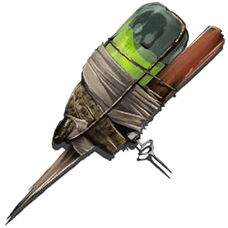 Improvised Explosive Device. Using tripwire traps requires two to be placed within close proximity of each other to generate a tripwire between them; as crafting only yields one trap, two are needed for the trap to function. Just like the IED, you and your dinos can set off your own gas trap by stepping on the tripwire; allied dinosaurs and tribe members, however, are immune to the gas.[1]

Breaking a narcotic trap by hand or with tools or weapons will detonate it and any trap it's connected to, while using the demolish function on a friendly narcotic trap will allow you to pick up the item and place it elsewhere.

Dinosaurs knocked out by a narcotic trap's effect will not be available for taming.

Note that you can still build torpor on wild dinos by using narcotic traps during taming. Just make sure that in the end it was knocked out by tranq arrows or slingshot. One set (2 crafted) of narcotic traps applies 240 torpor. So if you expect a wild dino would have around 1000 torpor, use 3 to 4 sets to build 720 to 960 torpor, and apply the last bit of torpor by tranq arrow or slingshot. That way the dino will take very little damage, as a narcotic trap doesn't do any damage, and you will need only a few tranq arrows after that to knock it out.

You can also use narcotic traps to build torpor on a dino that is in the taming process, although usually that's unwise in terms of resources as it takes 30 narcotics to craft a set of two traps, and it applies 240 torpor in total. Thus only 8 torpor per narcotic. Any dinos knocked out by the Tripwire Narcotic Trap will still have their food decrease while unconscious, enabling you to starve a dino without heavily damaging it, to prepare for a proper knock out, which is useful for low HP dinos like Dimetrodon that would die from a secondary taming attempt should the first one fail.

It also seems that wild dinos are not aggroed by narcotic traps. This is useful when attempting to tame dinos that flee when players attack them. The narcotic traps connection also becomes disconnected after a while.

The Tripwire Narcotic Trap is not currently paint-able, however this object may be re-mapped to include paint regions in a future update.