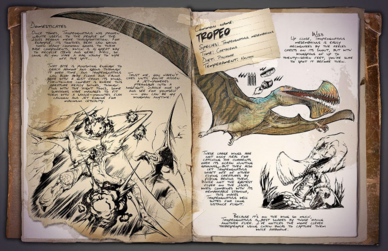 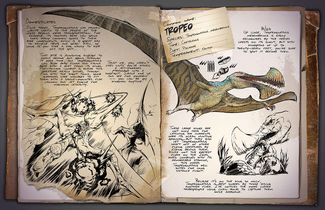 Dossier
These values may differ with what you see in-game or written elsewhere. But that is what the dossier says.
Group
Reptiles
Species
Tropeognathus mesembrinus
Time
Cretaceous
Diet
Piscivore
Temperament
Neutral
Release Versions 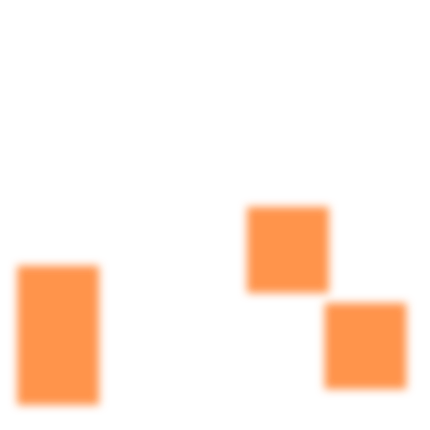 Tropeognathus does not show any signs of aggression towards anyone and anything that comes near it, especially when it lands. However, once it gets hit by anything, including

Chain Bola, it will become aggressive towards the said individual. Nearby Tropeognathus will target after anything that attacked it as well.

The Tropeognathus size-wise is bigger than a

Pteranodon but smaller than a

Tapejara, although its wingspan is on par with that of the

Its wings are covered in a striped pattern that ends at the body.

What defines this Pterosaur is its circle-shaped construct on the end of its elongated jaw, said jaw also has sharp jagged teeth.

This section displays the Tropeognathus's natural colors and regions. For demonstration, the regions below are colored red over an albino Tropeognathus. The colored squares shown underneath each region's description are the colors that the Tropeognathus will randomly spawn with to provide an overall range of its natural color scheme. Hover your cursor over a color to display its name and ID.

This section describes how to fight against the Tropeognathus.

Tropeognathus generally remains passive even if the survivor gets near them. Tropeognathus becomes aggressive if attacked.

The advised strategy for fighting the tropeognathus in the wild is to utilise one of the wyvern variants and their ability to use ranged 'special attacks'. This is due to their high damage and speed, allowing it to kill the tropeognathus quickly and efficiently.

Additionally one may follow the same methods for taming: Immobilize the Tropeognathus using

Chain Bolas from a

Ballista Turret via a Platform Saddle, preferably on a

Paracer may suffice if the Tropeognathus is found flying low enough or on the ground. Once immobilized, dismount and shoot from the platform saddle. This is not recommended for high level Tropeognathus’, the bola will likely not last long enough to kill them.

If one has a TEK Hover Skiff, the tractor beam allows for immobilizing and bolting it.

Almost all modernized long-range weaponry will do the trick while fighting against this creature, so long as you stay far away from its armor-crushing jaws.

Its jaw is large enough to break through armor easily. Additionally, they can pull you off a mount and fly high enough to cause a freed survivor to take high amounts of fall damage.

While they are very slow compared to other flyers (without saddle + pilot), they don't have much health, making them easy to kill with weapons like the

Tropeognathus is tamed non-violently, rather than through the use of tranquilizers. However, in order to trigger a way of feeding the creature, it has to be held in position with a

Chain Bola. Since it does not attack until it has been provoked the first time, chaining it down in bola will turn it aggressive against the individual. While its possible to use a

Bola on a Tropeognathus to stop it from flying towards, taming it is impossible as the taming bar will show as "Try the

Chain Bola..." while it is entangled with it.

Ballista Turret in another end with the

Chain Bola, and pull it over towards the trap area.

Bola (without killing it). Due to Tropeognathus' very slow food drop rate, this is one of the best way to drain its food faster as it is constantly used to regenerate lost health, allowing feeding to be sooner than later.

It is best advised that taming isn't already in progress if this method is to be used, as taming efficiency drop drastically due to damage factors if its in the process of taming.

The Tropeognathus has several utilities that makes it a valuable addition to any tribe's arsenal. It can act as a portable

Industrial Grinder; when grind-able products are placed inside, there is an option to grind them down below "Show Ancestry" when selected, albeit at a slower pace than the grinder itself (bugged on console version). Secondly, the

Tropeognathus Saddle has two functions once equipped: providing a

Gasoline fueled jet-boost, and a gun turret that takes

Grenade as ammunition. With similar maneuverability while not being boosted by its jet, it can be viewed as a replacement for the

Tapejara, but with all things considered, the

Tapejara does what a non-boosting Tropeognathus does at a much better capacity. Only while saddled can the Tropeognathus out-compete a Tapejara in terms of speed, but at the cost of the Tapejara's maneuverability. Likewise, the Tropeognathus is far more difficult to tame, and far less available in number than the

The Tropeognathus is capable of carrying the following Creatures.

For information pertaining specifically to the real-world Tropeognathus, see the relevant Wikipedia article.