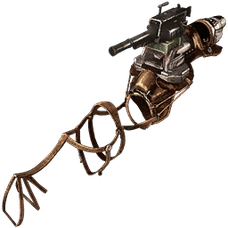 The Tropeognathus Saddle is a Saddle in ARK: Survival Evolved.

The Tropeognathus saddle is an item that will come along with the Tropeognathus in the ARK: Crystal Isles DLC. Unlike all other non-Tek saddles in the game, this saddle comes equipped with weaponry in the form of a flak cannon mounted on its back, and a jet engine on the rear.

When mounted, the Jet can be activated which will require

Gasoline to be placed into the Tropeo's inventory. Once the jet has been activated, it has 3 different speed settings which consume more gasoline with their scaling speed. During the Jet's duration, the Tropeo can also perform a barrel-roll maneuver to evade attackers or to rapidly change direction mid-flight.

Grenade as ammo and deals 450 damage against flyers on direct hit, which must be placed in the Tropeo's inventory.