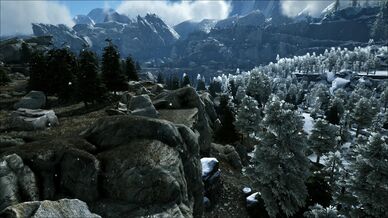 The Tundra Crossing is a region in the Valguero DLC.

The Tundra Crossing is a multi-biome transition zone between the Tundra and snow mountain biomes. It has all the appearances and creatures of the snow mountains in places, but unusually mild temperatures, sometimes getting warm enough to drop all cold effects without a source of warmth (despite the temperature, the snow never melts). Because of this, it makes a decent area to collect heavy pelts from the very abundant direwolf packs and other creatures that are needed to comfortably survive further up into the mountains while not freezing to death when gathering them.

There is also a small, iceberg-filled lake, home to a kairuku colony, although numerous predator species continually stake out the area as well, looking for an easy snack.

Nearby areas include the Tundra, Snow Mountains, and Skeleton Gorge