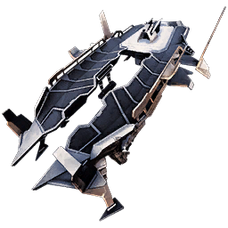 The Unassembled TEK Hover Skiff is a player vehicle deployed from an Item and is part of Expansion Pack Genesis: Part 1.

Element to cover great lengths of terrain through its hover and flying modes, the flying mode being significantly faster at the cost of significantly more element usage. It provides a flat surface to carry small to medium creatures such as

Quetzal. The vehicle also possesses a tractor beam, which can immobilize and carry even larger creatures. The vehicle can also hold items weighing up to 16,000 units in its inventory. Due to its weight ability, more than most Argentavis, and its speed and maneuverability, it is considered by most to be the best flyer in the game.

The vehicle cannot hover or fly without fuel, if overloaded with items, an explosive is attached, or the total Drag Weight of all creatures standing on its platform is higher than 800 (equivalent of 32

Corrupted Master Controller must be defeated on Gamma Difficulty to obtain its Tekgram. When crafted in a

Tek Replicator, the Hover Skiff will spawn within a radius of five meters.

If you can find someone willing to craft it for you, they will need to be in your tribe to do so. Preferably someone from another server who hasn't played the server you want the skiff on.

All creatures can be carried by the Tek Hover Skiff, excluding aquatic creatures, creatures with a Drag Weight of more than 1500 units, Alpha Creatures, Bosses,Titans and certain Event Creatures.

The following creatures cannot be carried by the Tek Hover Skiff:

This list may be incomplete; feel free to update as necessary.

Element to work. Below are the other various other forms of the chemical that can be used. The quantity given is the amount needed to gain fuel equivalent to a single

Fuel consumption rate varies with the state of the vehicle. It will use more, for example, if you're in flight mode, and even more if you have your tractor beam enabled in flight mode.