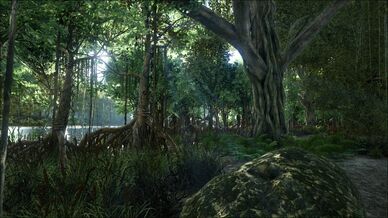 The Urwald Swamp is a region in the Valguero DLC.

you'll have to watch out for dangers there, mainly

it's a vast swamp full of swamp exclusive critters and

Rare Mushrooms, well exclusively to Valguero you can also get those mushrooms in The Emarald Forest as well as some

Aberrant Variants of exclusive swamp critters such as

The Urwald swamp is the only swamp available in Valguero DLC, there you can find

Plant Species X Seed for base defence, and the following creatures with different purposes:

Kaprosuchus as hidden base traps for PVP.

Paracer as a war mount and a walking house.

Dimetrodon as a living air conditioner for

Leech to kill it for

as well as many other exclusive creatures to that place on Valguero, you can also clearly see a

Tapejara but they don't naturally spawn there.