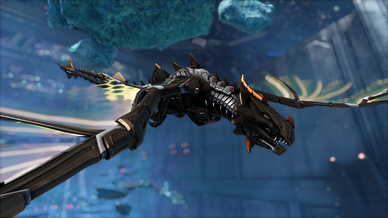 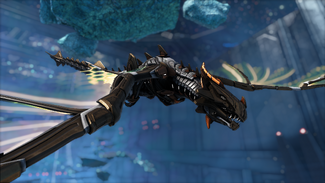 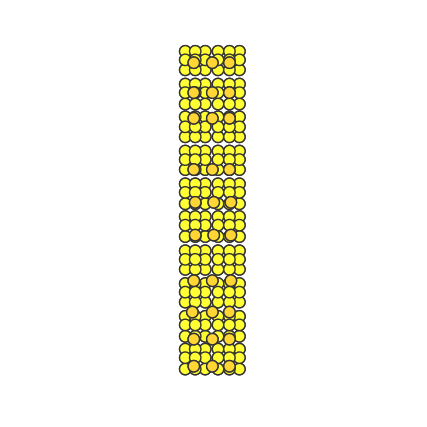 The Voidwyrm is a creature in Genesis: Part 2.

The Voidwyrm behaves much like a regular wyvern, flying around and attacking those in range. It becomes aggressive upon spotting a player and will use its electric breath to dismount you from your tame. Unlike regular Tek dinos, the Voidwyrm spawns at exactly the same levels as regular wyverns going up to 8 increments higher. The taming bonus seems to be bugged however. When force tamed, the 50% taming bonus is applied twice, ending up with a 2.25x level multiplier

The Voidwyrm greatly resembles a tek/robotic version of the Wyvern.

This section displays the Voidwyrm's natural colors and regions. For demonstration, the regions below are colored red over an albino Voidwyrm. The colored squares shown underneath each region's description are the colors that the Voidwyrm will randomly spawn with to provide an overall range of its natural color scheme. Hover your cursor over a color to display its name and ID.

This section describes how to fight against the Voidwyrm.

Voidwyrms act pretty much just like standard wyverns; they will attempt to get in range, perform their breath attack, and attempt to bite you if you are too close. The one difference is that when they perform their breath attack, their forward momentum will stop. If you manage to escape its breath, it will give you some time to get away from it, or in the case of fighting it, allow some distance to fire at it with ranged weapons.

Wild Voidwyrms take reduced damage from all sources, making them more dangerous then tamed ones while on an even level with one another. Once tamed they take full damage.

Since Voidwyrms are only encountered in the space biome in the middle of the map, it's best to either combat them with a swarm of creatures that you don't have to ride, or by using powerful handheld weapons while flying around without any tames. Relying on a ridden tame is unwise as they can dismount you with ease. Trying to overpower them with the likes of a Rex also can't easily be done due to the Rex's atrocious movement while in space, just like many other large creatures.

The Fabricated Sniper Rifle is one of the best options for not only killing a Voidwyrm, but also initiating the taming process. Read down below for more information. Other great options include the Compound Bow, Tek Bow, Tek Phase Pistol, and if you'd like to play a little more dangerous up close, a Pump-Action Shotgun or Assault Rifle. Simply kite the Voidwyrm around with your Federation Tek Suit, boosting away as needed to get distance.

Not many tames that can navigate the space biome can easily be advised. A Shadowmane is swift in the biome and a few of them can take on a Voidwyrm as it can turn on dime, though if you are riding one, expect to get dismounted more than once. Using tames as a distraction while you shoot the Voidwyrm from afar is among the safest of strategies.

Voidwyrm's breath attack causes your torpidity to rise. Be careful, or you will pass out.

The Voidwyrm will stop moving when using its breath attack, leaving it open to a counterattack. The range of its breath isn't too far so as long as you keep your distance, you can wear it down without taking any damage.

The Voidwyrm has to be fed with

in order to advance the taming process. When breeding Voidwyrms, you will not need Wyvern Milk to raise it, it will feed on meat when turning from a baby to an adult, making it one of the easiest wyverns to raise.

is the only taming food for the Voidwyrm.

To tame the Voidwyrm, you must first damage it to a certain amount of health points (depending on the Creature's level). This is best achieved by bringing a Stegosaurus in a cryopod (doesn't need to be high level) and sitting on the back of it while shooting the Voidwyrm. Make sure to scan it often to avoid killing it. Another method is kiting it with a Fabricated Sniper Rifle or Tek Bow set to metal arrows and instant projectiles, but this is riskier. Since wild Voidwyrms take reduced damage, bring more ammunition than normal. Once the damage threshold is achieved, the Voidwyrm will stop for a brief moment, with small, blue thruster fire coming from the base of the wings attaching to the main body (scanning with HLNA is a much more reliable way of telling how much health it has). At this point, it must be mounted in a similar way to the Equus in order to tame it. To avoid dying while trying to mount it, sit on a stego until the Voidwyrm runs out of stamina from using the breath, or use a shield. Make sure you have

in your last hot bar slot. It will remain aggressive and attack you. Get to its sides for best results, then ride it when the chance arises. To advance to the taming process, you must wait for it to do a barrel roll. While it is doing so, you must press E,

to feed it the

to soothe it so it does not kick you off, which will decrease Taming Effectiveness as well as Taming Percentage if it does so. It is recommended to watch for the text in the bottom middle of the screen rather than watch for the barrel roll, as the roll itself is incredibly short and could result in you dismounting while attempting to feed it, and the text lights up noticeably. Be careful not to be trigger happy when feeding it as you may dismount from it on your own volition. You will need very good reflexes for this, as the window to feed Mutagen is very short.

Once tamed, the Voidwyrm will consume a standard carnivore diet of raw meat and other meats.

Wood/Thatch/Cactus Sap Collector: They can collect wood, thatch, and cactus sap when landed by pressing C. They will collect thatch and cactus sap much more efficiently than wood.

War Mount: They are fast, with low stamina-drain comparable to that of an

Argentavis. They are moderately maneuverable, but their breath attack is devastating. They can also use all their attacks on the ground, as well as being able to sprint while landed. Pressing C while landed performs a knockback that can provide an escape from enemies. For a strong Voidwyrm with powerful bites and ranged go for Stamina, Melee Damage, Health.

Base Destroyer: The Voidwyrm's breath can damage

Tek Structures and below, which makes them the fastest creature that can damage these structures. However, this may not be a good idea as they cannot use saddle armor and their breath attack is short-ranged.

Travel: Voidwyrms are faster than most other flyers and can go farther on their stamina. Beware their large turn radius, however, as they can be difficult to steer until you've had some practice. Also note that a Voidwyrm on follow and flying does not come low enough to mount, and does not land even when whistled not to follow, so it can be difficult to get one back under control.

Hunting Tool: With a bite as strong as a Plesiosaur, powerful special attacks, high meat gathering efficiency and the ability to fly at speeds unmatched by few other flying creatures, Voidwyrms are among the best ways to quickly gather large amounts of

Raw Prime Meat and a wide variety of Tributes; Voidwyrms in addition to the other wyverns are also the only flying creatures treated as large carnivores, meaning that most of the small and medium-sized aggressive wildlife is prone to ignore them and their riders unless provoked, greatly reducing the nuisance while traveling.

Support: The Voidwyrm's ability to stun and dismount riders is invaluable in a PvP scenario. You can keep a creature stunlocked with the breath attack as long as you have the stamina to sustain it. This can allow your other tames to dispatch the creature or vulnerable rider with ease.

Damage: Voidwyrms deal large amounts of damage with their bite and electric attacks; they're some of the most powerful flying creatures in the game. While they may not match a

Rex or Giganotosaurus for sheer damage output, a Voidwyrm can be flown across the map and is extremely maneuverable.

Transport: Voidwyrms can carry a decent amount of weight and are quite quick. Using a Voidwyrm, one might safely and quickly transport people or materials across an Ark.