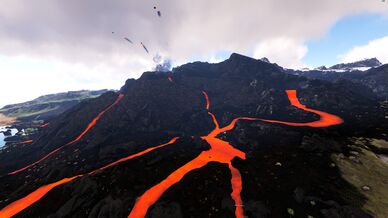 Volcano Plains is a region in Ragnarok.

The Volcano Plains are the ash covered fields surrounding the Volcano. This is a very dangerous area, as many hostile creatures, such as Mantis, spawn here. Upon entering the area you will receive a debuff (Hot & Burning). The bones of enormous beasts litter this place.

On the east is the Dragonmalte Trench from where Wyverns sometimes fly out.

On the southern end of the Volcano Plains around 33,55 there is the potential for the player to instantly die upon touching the ground. Either by running into the area or by dismounting. The glitch causes death bag retrieval to be very difficult and can only be accomplished by being able to interact with the "backpack" or your corpse while standing on a mount.