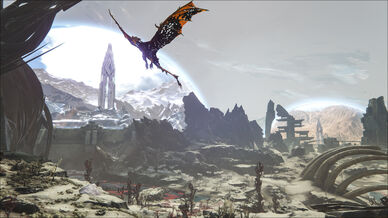 The Wasteland is a shieldless region found in DLC Extinction.

Orbital Supply Drops, which destroy anything in its path. The

Orbital Supply Drops feature PvE style raids, in which survivors must fend off against the Corrupted Creatures to be able to claim the rewards it hides inside.

Meteor showers are common around Corrupted Earth. The Wasteland, and other sections of the map outside of the Sanctuary are unsafe from meteor showers, which not only instantly kills anything where it lands, it can also destroy anything near it.

That, along with its harsh environment that cause

Food to drop more rapidly makes it a dangerous place to remain for too long.

The Wastelands are referred to as No Mans Land, and for good reason. The meteors, orbital supply drops, element, and hordes of corrupted creatures make the wasteland incredibly dangerous