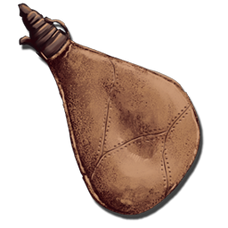 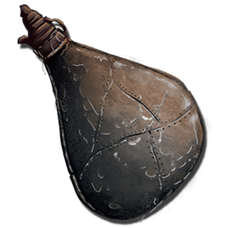 The Waterskin is a tool that acts as a water container to keep the player hydrated. Unlike its higher-level counterparts, the

Canteen, Waterskins are easy to make and light-weight, making them invaluable to early players. The downside, however, is that Waterskins slowly leak out any water currently inside them.

Players can only drink from a filled Waterskin once before refilling.

Players can use a Waterskin to carry water and help prevent

Dehydration while traveling. To use, fill the Waterskin by equipping it and using it (either through your inventory or hotbar) while standing in water. Filling the Waterskin this way will also refill your own

Water. Alternatively, you can fill it up by placing it in the inventory of a

The water level of a filled Waterskin is shown by the blue bar at the bottom of the item frame. Take note of it periodically, as it will slowly decrease in fullness. It takes about 36 minutes and 40 seconds for a filled Waterskin to fully empty on its own, losing 1 point of water every 22 seconds.

During Rainy Weather, a player can fill a Waterskin while standing outdoors.

It is not recommended for players to make long inland excursions without knowledge of a nearby water source for when the Waterskin drains itself.