This article is about the region on Valguero. For the mountain on The Island, see Weathertop.
Weather Top 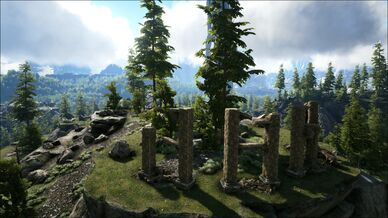 The Weather Top is a region in the Valguero DLC.

Unlike the Weathertop on The Island, this location has ruins that are very similar to those shown in the Lord of the Rings movies, specifically the Fellowship of the Ring. It is a hilly location, and the ruins themselves have cliffs on three sides, which makes for a very defensible base if built correctly. Beware, though, as large dinos such as Allos and Rex like to spawn nearby along with smaller predators. You may even find the occasional wandering Giga.