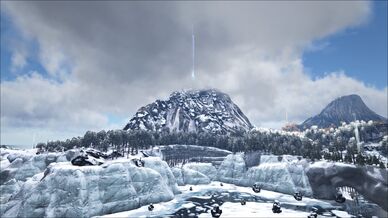 The Whitesky Peak (previously known as The Radiant) sits in the northwest of The Island, with the blue Obelisk hovering above it.

This location lays in the tundra region. Here it is cold enough to cause hypothermia. Unprepared survivors should camp nearby and go into the tundra for short periods of time as hypothermia hurts you.

Covered with rocks and snowy bushes and snow everywhere as well as ice. It is filled with roving packs of direwolves, and herds of mammoths. The lone sabertooth stalks the large antlered megaloceros in this diverse land. Hypothermic insulation is a must here since the temperatures are nearly always below freezing. This is not a place for new survivors since even hide armor will not keep you warm, only fur and campfires. Or buff up stamina so you can run longer and it'll keep your muscles warm. A torch may keep you a bit warm as well. For those survivors who plan on living here permanently it is recommended to increase fortitude, as this will make you more resilient to the bitter cold. Wolves are very quick so a dino escort would not go amiss for defense. Rexes are also indigenous on the mountain and can be found wandering further into the valley. Beware as the giganotosaurus also stalks this area.

These dangers do not come without reward. The mountain is rich with metal, crystal, and obsidian. Crystal can be found throughout, and oil rocks are on the cliffs near the oceans. Silica pearls are easily obtainable in the shallows, even without scuba gear and on the shores. The wandering mammoths, deer, and wolves are a rich source of pelt, which can be fashioned into fur armor, or traded to those without the mettle to venture into these dangerous lands.

If you can survive, the Whitesky Peak can be a wonderful home.