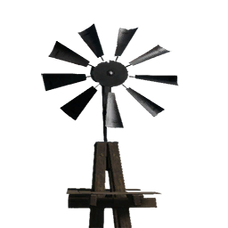 The Windmill is a Structure in the Primitive+-DLC of ARK: Survival Evolved. It can be used to quickly and automatically grind specific items.

The Windmill must have

inside of it to use as fuel. When it is fueled, it will perform the following conversions automatically:

Multiple conversions can be performed at once, but not of the same type. For example, if a stack of Dried Wheat and a stack of Crystal are both placed inside the Windmill, they will each be converted into Flour and Salt every 5 seconds, but if there are multiple stacks of Dried Wheat, only the front-most stack will be converted.