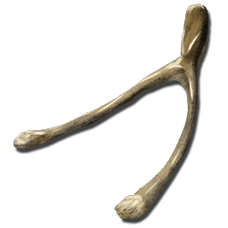 The Wishbone is a drop from the Super Turkey during the event Turkey Trial. It can be used to create the Chieftan Hat Skin, "Turkey" Emote, or to summon a DodoRex at a Cooking Pot.

In a Cooking Pot, the Wishbones can be crafted into items as follows:

DodoRex can be summoned at a Cooking Pot for 400 Wishbones. The first item in the cooking pot will be a "Summon DodoRex" icon with an orange outline, similar to that of the Broodmother summon. Place the wishbones and some fuel in the cooking pot, light the fire, and click "Summon with Tribute".
The DodoRex will appear on top of the Cooking Pot and can be claimed with the Use key E.
The DodoRex will last for 25 minutes once summoned - whether it's claimed or not.