This article is about Wooden Club, not to be confused with 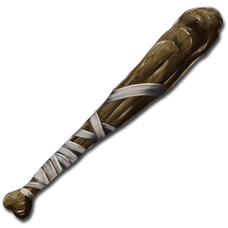 The Wooden Club is a tool for knocking out Humans and small Creatures. It is especially useful for low level players, as it is very cheap to make and available at level 8.

The Wooden Club is used to inflict Torpor, while it is rather bad at damaging a target. The club is the earliest way to effectively immobilize small creatures. Once unconscious, creatures are defenseless, and are able to be tamed. It is most effective if you hit the target's head.

If used to hit a player, the club always deals 5 Damage and 18.8 Torpor per swing, no matter what armor the target is wearing or which body part you are hitting. Better Item Quality of a club will increase the damage and torpor inflicted.

The Wooden Club can also be used to harvest dead

Kairuku, which yields a larger amount of

Organic Polymer than any other tool.