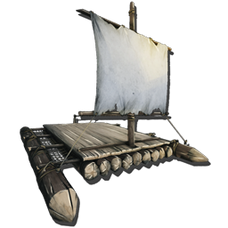 The Wooden Raft is a player vehicle that allows for transportation on water.

The Wooden Raft platform is useful for establishing a mobile base; as structures, beds, and storage items can be placed directly on top. The Raft can also ignore some build restrictions such as building near Enemy Structures. Rafts are especially good for new players, as most creatures (except the ocean dwelling

Leedsichthys) will ignore and cannot damage the raft and it's driver while it is being driven. (Be wary that wild creatures will still attack tamed dinos or other players on the Raft). It is advised that New players should build and use a "house-boat" for shelter and protection as soon as they are able to.

Rafts are essentially the wooden boats of Ark with their many fundamental uses. They can be used as cargo ships transporting resources, other survivors and even large

Creatures. With building modifications, Rafts can be a type of shelter, mobile home, a houseboat, dino trap or even built to be a battle ship for raiding and pirating other players. The sections below will teach you all you need to know about Rafts.

Controlling the raft is easy. Though because it is on water, it continues to slide some distance before stopping.

You can move the raft forward and turn when moving by pressing WASD,

and Move the Camera with the Right sticks on controller and the Mouse on pc. The Raft cannot move in Reverse except only on Ark Mobile.

You can hide or unhide the raft's sail by pressing and holding E,

This makes it easier to see in front of the raft, especially if you've built structures on it.

On ARK: Survival Evolved Mobile, a

Sail Plume can be attached to increase the speed of the Raft.

For more information and tips on building see also Building.

The raft on its own does not block any spawns; but will prevent natural spawning if there's a foundation or another structure such as pillars, walls etc. attached. Many structures can be placed directly on the raft, however, walls and other building structures require a

Foundation. Foundations do not snap to the raft, therefore careful placing is needed.

Players should be careful when building structures obstructing the rudder (the steering part of the raft, consisting of a lever and bottom rudder), as their survivor may become stuck in the structure upon dismounting the raft.

Since structures do not snap to the raft itself, it's wise to use the wood lines in the raft's floor to align floor foundations. To make tiny adjustments while rotating the foundation, lower control or looking sensitivity. To quickly and easily get structures aligned to the raft, utilize the camera reorientation when your avatar mounts the raft. Sometimes a very minor camera adjustment is needed to be considered a valid building location, but your alignment will be within a few degrees. Place a pillar from this orientation and a foundation will snap to the edge. Foundations will snap to each other until the center of the next foundation is no longer above the raft platform; ceilings may then be attached to the edge foundations and new foundations will have a valid snap point under these ceilings. These ceilings may then be removed, and any foundation placed under them (which can calculate a valid snap path back to the raft) will remain in place. Placing a 3x3 foundation pad centered on the side of the first placed pillar facing the player (after dismounting the raft) will overhang the raft front by about a half foundation. If the foundations are sunk into the raft from this alignment, they will protect every portion except the rear pontoon tips, which may be used to mount the raft (but will take damage from anything capable of harming wood structures).

Pillars can also make it possible to build a foundation inside the boat model and may fully enclose the raft's platform, protecting the bottom and top from damage until the foundation is removed. This method allows you to build over the rudder without risk of getting stuck upon dismount.[1] Using ceilings, you may also extend the raft's size beyond the platform (and foundations will snap beneath the ceiling's overhang), however this must not be used to grief or exploit (PvE and Aesthetic uses allowed[2]).

As is current with build 311.99; pillars, ceilings and foundations may be used to lower successively built foundations further into the raft. The method involves placing a pillar, snapping a foundation to the side, destroying the original pillar, placing a new pillar at one of the lower snap points of the foundation, and placing a new foundation at the pillar's snap point. Rinse and repeat This can be tricky online because the vertical snap points are very close together and latency can cause the structure to snap at a different point than the player thinks they're looking.

Lowering foundations into the raft is possible using only finesse, pillars, and foundations as described; but a second pillar may be placed into the foundation after the first pillar is destroyed, a ceiling placed atop this pillar, another ceiling placed adjacently to make an overhang, and another pillar placed under this ceiling extension at a lower snap point (although it may look very similar). Over several iterations, this will place the newest foundation fully inside the raft. When using thatch foundations, remember that the thatch model looks to be a plane or two higher than the actual surface. You'll know when you're building into the raft deck because the option to mount the raft will appear instead of interaction with the foundation; any exposed deck surface may be damaged by metal tools and some creatures.

Multiple levels of foundation may be placed on the same raft and will snap to each other horizontally (as well as at the vertical snap points of each foundation). This mechanic can be utilized to make a 1x1 enclosed structure over the rudder, where the floor can be used to mount the raft, while the rest of the raft surfaces sit safely inside the slightly higher placed foundations.

If you decide to build a mobile home on a raft, you should be aware that making your home too high can severely limit your visibility when sailing it. A small improvement is to hide the sail in the radial menu. You can use the Third-Person, Orbit Camera Mode (see your options for the key - hold the key, not just press once like the K-Mode), zoom out, and turn around moving the mouse. You can also move the camera beneath the raft to see creatures and other things in the water. But in selfie mode you can't change direction. Building tall structures primarily to the rear or sides of the raft (especially when built on extension ceilings or foundations) can make visibility much better.

The raft has 20,000 health in total, and is considered wood tier regarding to health. Metal pike does 20 damage, a grenade 788. The mast and helm are damageable by player attacks. Items inside of containers do not add to the raft's weight limit, and the raft itself does not store items. The raft has a total weight limit of 1800 units of the dinosaurs/structures on it.

As the Wooden Raft is a Vehicle, it is actually treated as an Entity (such as a Human or Dinosaur) rather than a static Structure, thus it does not have any preset paint regions.

Instead, you can still doodle on it by "attacking" it with a

Paintbrush, which will open the "Apply Paint" Menu. Then, click and drag your cursor over the 3D model (like a paintbrush) to draw anything you want. See Painting for more information on doodling.