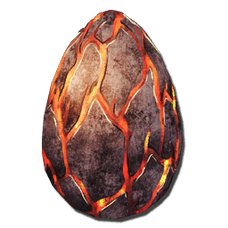 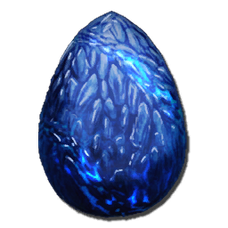 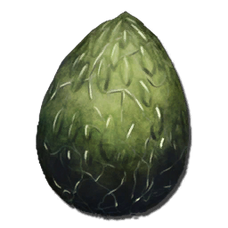 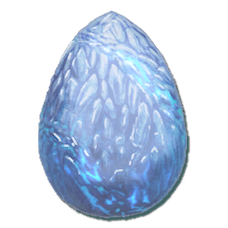 Wyvern Eggs are items in the Scorched Earth and Ragnarok-DLC of ARK: Survival Evolved. They come in four varieties and are used to hatch

Ice Wyverns accordingly, and can be used to make

Wyvern Eggs are randomly dropped by

Wyverns. They can be eaten or used to make

Wyverns mate, the resulting egg can be hatched into a baby

Wyverns will cause them to become hostile and attack the survivor.

Wyvern needs between 18h and 2d before having the capacity to lay eggs again. The incubation time can be reduced by up to 20% if the egg is placed in an

Breeding Wyverns must be of the same element type (I.E: Two Poison).

On Scorched Earth Wyvern Eggs are only found in The World Scar near the blue and red obelisks. Along the walls there are many indentations, some of which will contain a nest with a Wyvern Egg. Upon stealing the egg, any nearby wild Wyverns will begin to attack the player.

On Valguero Wyvern Eggs can be found in the Great Trench (only Ice Wyvern ones) and the adjoining cave (only Fire Wyvern ones).

Gas Masks are highly recommended for Poison Wyverns and

Whips can make for quickly snatching eggs and then remounting to spare some time allowing for collection of multiple eggs in a single attempt.

Note that a wild, non-alpha Wyvern flies at a speed of 2310. You may use this value to compare the speed of mounts you are about to use.

Building a trap near the scar to either trap or kill nearby wild Wyverns can take off some of the pressure when getting an egg.

Albiet rather risky, A Flyer such as a

Lymantria can be used in a combination with a Speed-Leveled

Gallimimus. A tamed Gallimimus runs at a speed of 2190, which means it needs a minimum of +6% Movement Speed to outrun a Wyvern. The faster the better, and watch out for stamina as well.

After taking the Egg fly to your escape Vehicle and then mount the Gallimimus and make a getaway while the Wyverns are focused on trying to kill your sacrifice.

To do this trick safely, +20% speed is recommended as any Lightning Wyverns can easily electrocute your Gallimimus otherwise.

Oviraptors will, in fact, steal Wyvern eggs from nests when they are positioned close enough to do so, despite some sources claiming otherwise. (Tested working as of 306.89 on official servers) Consider using Nearest Follow settings to aid Oviraptor positioning. When the Oviraptor grabs the egg simply take it from Oviraptor. This avoids the penalty of angering every Wyvern in a large radius as you technically did not steal the egg from the nest yourself according to the game. This is probably the safest method, but also probably the most labour intensive as taming even a low level Oviraptor can be outright impossible without already established egg production. Make sure you take the egg from the Oviraptor and do not carry it away while it is still holding the egg. This is reported to both erase the egg and break the Oviraptors ability to grab eggs in the future, likely related to the draw distance of the nest that the game may think the egg is still located at.

Wyvern, they are the easiest way of getting an egg, and the only flying mount other than the

Griffin (on Ragnarok) capable of outrunning a wild Wyvern with pure speed.

Wyvern' attacks. They can have decent health(around 1500) and enough weight to collect multiple eggs in one run. They are around the same speed as a

Pteranodon. A tamed Tapejara has a movement speed of 2087.

Argentavis has good weight, making it capable of snagging the eggs, but escaping may be difficult as it only flies at a speed of 1350. It is advised to choose an egg that has as few as possible surrounding

Wyvern. One could increase the health of their

Argentavis and try to tank their way out. If all of the eggs have at least one surrounding

Wyvern, try to choose one that has a lone

Poison Wyvern as it is easy to dodge its attacks. Alternatively, by putting points into health, stamina and melee, it is possible to kill enough wyverns to escape. This is not recommended if there are many wyverns nearby, multiple alphas, or if you are using a low-level Argentavis.

Pteranodon is the fastest alternate flyer. It has a movement speed of 2562, which means being BARELY faster than wild

Wyvern (as long as it is not encumbered) and has low health. When escaping, try to fly low, through arches, around rocks, or any other maneuvering to put objects between you and the pursuing

Wyvern. They can sometimes get stuck on the rocks, putting more distance between you and them, and allowing more time to escape. If the

Wyvern as the 'C'-spin maneuver provides a small burst of increased speed.

Rock Elemental has decent health, ranged attack and immunity to wyverns' breath attacks, plus its natural melee damage reduction, wyverns are having headache to deal with this golem. Watch out for Poison Wyvern's projectile, it cannot damage the golem but the player sitting on it.

A Phoenix has decent health, immunity to fire wyvern breath attacks and are small enough to easily enter the nest holes. Once the player has an egg, using Rocket High Speed allows the Phoenix to easily outrun any wyverns and return home. Beware poison wyverns as a high level could kill the rider outright.

With its high base speed, dual passenger seat and skydive ability for extra speed, the

Tropeognathus with saddle can simply outrun wyverns with engine boost, reaching a speed of 2867. The cannon can do massive damage to wyverns as well. Level up stamina.

With it's high speed, mobility and redirection the Bloodstalker can easily lead Wyverns away so you can turn back and get out of their agro radius to get eggs with little problems. WARNING: The breath of a fire wyvern hitting your Bloodstalker will render you unable to pull in or shoot out new webs. This effect lasts throughout the entirety of the burning debuff. You can slow your fall with left CTRL and use your double jumps until the debuff ends, but the wyverns will likely catch you.

Rock Drakes are a great mount to steal wyvern eggs with, as its ability to go invisible combined with its mobility makes for an easy way to get into and out of the trenches. And, while it is not recommended, a Rock Drake can fight more than one wyvern at a time (It might be hard to fight them though unless your Rock Drake has a Tek Saddle). If done right, you can even get an egg and escape without having to engage a single wyvern. The only problem is the Rock Drakes are acquired through a similar means via stealing eggs from a Rock Drake trench.

Although it's unfair, if not on Hardcore mode, players can cheat death(as they revive as many time as they are dead). You will eventually obtain an egg by following the steps below:

Wyvern Eggs require a very high temperature in order to hatch. A minimum of 15

Campfire will be needed to reach the required temperature. More fires may be required during the night, to accommodate the lower ambient temperature. It takes around 3 days and 20 hours to grow to an adult and they will take

Wyvern Milk for imprinting and petting but can be rare prompt.

Air Conditioners are greatly discouraged because of their costs and impossibility to run during Electrical Storms.

Dimetrodon levelled Up in Damage to provide a powerful thermal insulation. Multiple Dimetrodons can be used to stack their insulation up to entirely replace Campfires and Air Conditioners.