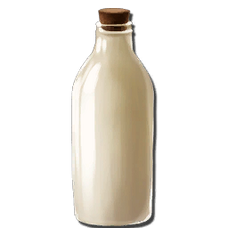 Wyvern Milk is an item in Scorched Earth, Ragnarok,Valguero and Lost Island that is used to feed baby Wyverns. It is gathered by collecting it from the inventory of wild unconscious female

Alpha Fire Wyvern of either sex.

Used to raise baby Wyverns and Imprint upon them. It should be noted that Wyvern milk is the only food a Wyvern will take before the adult stage. Baby, juvenile, and adolescent Wyverns will not eat raw or cooked meat.

It can also be consumed by players to grant the Insulating Warmth buff, which gives 787 hypothermal insulation and immunity to contracting Diseases. It also grants immunity to the damage-over-time from the Enflamed debuff given by fire breath attacks from

Wyvern and Bleed effect from

Carnotaurus . It does not give immunity to the Enflamed debuff given by lava, nor does it affect the damage from the breath attack itself. The buff lasts for 180 seconds from the time of usage.

After knocking out a female Wyvern, 5 Wyvern Milk can be found in its inventory. Wyvern torpor depletes quickly, so you should loot it as soon as possible because once the Wyvern wakes up with the Milk still inside, it will be gone until the refresh period when it is knocked out again.

It's possible to knock out the same female Wyvern multiple times and receive milk if a refresh period of 1hr is allowed. however it is not possible to keep said wyvern contained within a trap as any conscious wyverns immediately "teleport" to the trench when out of render distance

Alternatively, 50 Wyvern Milk can be found in the inventory of an Alpha Wyvern of any sex, but will have the spoil time of a normal inventory since the Wyvern is dead.