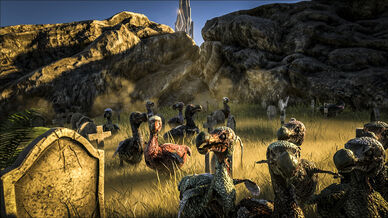 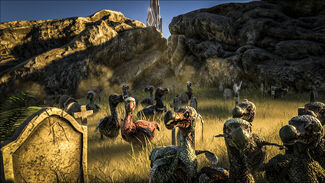 The Zomdodo is an undead variant of the

Zomdodos usually spawn in groups and will attack anything they see. The group will spawn clustered around the

DodoRex, which itself will spawn in a random location on the map during the ARK: Fear Evolved event. A Zomdodo is more resilient and hits harder than a regular

Dodo, in addition to moving much faster.

The Zomdodo is a zombified version of the Dodo with pieces of flesh missing.

This section displays the Zomdodo's natural colors and regions. For demonstration, the regions below are colored red over an albino Zomdodo. The colored squares shown underneath each region's description are the colors that the Zomdodo will randomly spawn with to provide an overall range of its natural color scheme. Hover your cursor over a color to display its name and ID.

Zomdodos cannot be tamed under normal circumstances. While the DodoRex is active, they will be hostile. However, once the DodoRex is killed, surviving Zomdodos become passive, and a player can tame one simply by walking up and pressing the use key (E by default) to claim it. A Zomdodo has no inventory, nor can they lose hunger, be fed, gain experience, or lay eggs. Otherwise, they act as a living dodo.

They used to only be released from a

Cryopod when the Halloween event is active, otherwise the pod would shows as a raptor image. They may also disappear upon server restart when outside of the event. However, they are now permanent like the Zombie Wyvern when tamed during the Halloween event.